“James See has adopted the entire neighborhood, from skaters to surfers, giving them a sense of belonging and a job or two. This neighborhood has been invaded by tweens and teens alike, sporting their boards and congregating on the corner. Thanks to James See and a bit of Patience from Peggy (Corner Store Owner), the kids have a safe place to hang out.” 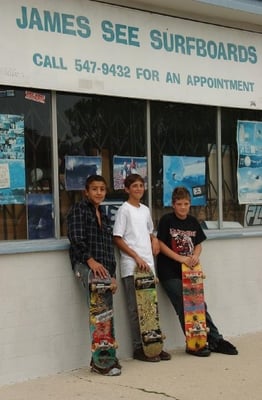 I had a great time getting to know my new son-in-law, James See, while visiting family in San Pedro, California during the New Years holiday.  James and my daughter, Deanna, were married just a year ago.  It is easy to observe how happy they are in their new life together close to the beaches they both love in southern California.  It was also wonderful seeing Deanna so happy and catching up with my grand kids Mike and Cameryn pictured above (to my right, Mike, and 2nd to my left Cam) on this website.

James and I have much in common.  I started surfing about 10 years before James on the same beaches of Redondo and Torrance.  We both have surfed in Mexico and Hawaii.  We both bought our first surfboards from Greg Noll in Hermosa Beach.  But James followed his dream of making the surfing world his life by building surf boards with the popular “Onion” brand and traveling the world surfing spots that most of us only dream about…  Most importantly, we both have the honor of fathers’ who came from the “Greatest Generation.”  James’ Dad, Robert, was a WWII Marine Corps fighter pilot ace, who served with heroes like Pappy Boyington and the famous Black Sheep Squadron. http://en.wikipedia.org/wiki/VMA-214   My Dad, Vernon, survived the Japanese attack on Pearl Harbor on December 7, 1941, while serving aboard the USS West Virginia…

Even more striking is what we both have in common making a difference with kids in our own communities.  James is well known in San Pedro for his mentoring of youngsters with a passion for surfing, including giving them jobs and teaching them how to surf.  I know from my own experience growing up as a kid in South Bay near Palos Verdes how important surfing was to my own well being and feeling of accomplishment.  The camaraderie and competition of the the sport of surfing provides big rewards for kids who participate with a winning attitude.  Surfing helped me feel better about myself and gave me goals to be the best as a teen living a dream…

I am not only happy for my daughter’s new life, but proud to call James See my son-in-law.  I am looking forward to our close friendship for many years to come, and the chance to get back to my surfing roots.  The memories of my own experience as a teen while revisiting the popular surf spots of southern California, reminds me of some very positive and fun experiences as a young surf dude in So. Cal.

Steve Sparks is a retired information technology sales and marketing executive with over 35 years of industry experience, including a Bachelors’ in Management from St. Mary’s College. His creative outlet is as a non-fiction author, writing about his roots as a post-WWII US Navy military child growing up in the 1950s-1960s.
View all posts by stevesparks →
← Not near enough attention given to the children affected by war! Kids suffer in silence and fear... It is time for the boomer generation to reveal family legacy of WWII and life after war... Our grandkids demand it! In honor of Sgt Major, Maurice Chapman Simpson Jr., U. S. Marine Corps... →