What a child thinks when traumatized…  Quote from this website article…

What a Traumatic Situation is Like for a Young Child

Think of what it is like for young children to be in traumatic situations. They can feel totally helpless and passive. They can cry for help or desperately wish for someone to intervene. They can feel deeply threatened by separation from parents or caretakers. Young children rely on a “protective shield” provided by adults and older siblings to judge the seriousness of danger and to ensure their safety and welfare. They often don’t recognize a traumatic danger until it happens, for example, in a near drowning, attack by a dog, or accidental scalding. They can be the target of physical and sexual abuse by the very people they rely on for their own protection and safety. Young children can witness violence within the family or be left helpless after a parent or caretaker is injured, as might occur in a serious automobile accident. They have the most difficulty with their intense physical and emotional reactions. They become really upset when they hear cries of distress from a parent or caretaker.

However, young children are affected by traumatic events,

even though they may not understand what  happened.

*****
I selected the above quote from the National Child Traumatic Stress Network (NCTSN) because it includes, “young children can witness violence within the family or be left helpless…”  This is exactly what happened to me at age 10 while witnessing violence in my home…  Following is an excerpt from my book to show a real life example of what it is like for a kid to observe a traumatic situation…  “Fighting Anger After the War,” a short article by Steve Sparks…was also published in June of 2012.

“As an added tragic note, my brother didn’t mention the time in Waukegan just before he entered the Navy, that Dad hit him in the head after Jerry was confronted in front of the house by some bullies. He almost took them all on and could have cleaned up since he was so strong. Dad hit his head so hard that it swelled up and we thought he needed medical attention. But Dad was afraid to take him to the hospital. Fortunately, Jerry recovered, but it is my opinion that this incident gave him a severe concussion that needed treatment. I know one thing for sure, as a little kid it hurt me deeply to see this happen. To this day I remember the terrible incident vividly. This horrid event is an example of a man who lived by day as a highly respected war hero training boots at the US Naval Training Center; and by night Dad was a mentally ill dangerous man who kept his family in a cage as victims of extreme abuse.  None of us would talk about it for fear of being beaten.  The US Navy did not see it, nor probably wanted to see it. This was a man who was solely responsible for our welfare and without him we would have been poor and homeless at the time. We had no choice but to live with him and to avoid his wrath as much as possible. None of us even understood the gravity of the situation until later.  Denial certainly helped us survive but all the baggage is clear.”
I know now that thousands of families during the post WWII and Korean War period lived with traumatic circumstances and conditions at home.  Most of us survived and thrived, but not without all the emotional baggage that is stored in our minds forever.  It takes a very specific path of healing to reconcile traumatic events for children and adults.  But for children it is often pushed way back in the mind and might rear its ugly head later or there is a loss of memory.  This is true for adults too who suffer from trauma.  A child is helpless, however.  The only defense is to escape to a happy place if at all possible.
Steve Sparks, Author, Reconciliation: A Son’s Story  Click to order… 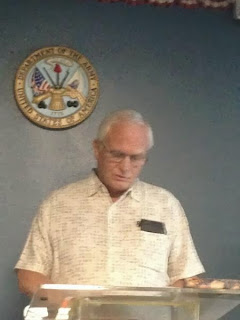 Steve Sparks is a retired information technology sales and marketing executive with over 35 years of industry experience, including a Bachelors’ in Management from St. Mary’s College. His creative outlet is as a non-fiction author, writing about his roots as a post-WWII US Navy military child growing up in the 1950s-1960s.
View all posts by stevesparks →
← Post War Trauma...the children of combat veterans... "Children inhale the pain of parents and store it!" I picked "guilt" as the number one thing to let go of in 2014... "Forgive yourself and move on!" →