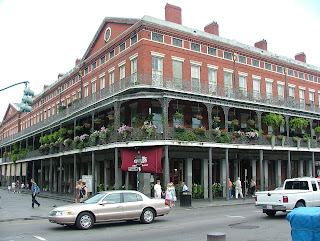 “One of the people we have to thank for this large outdoor garden in front of St. Louis Cathedral, as well as the two apartment buildings on either side of the square, is Micaela Leonarda Antonia Almonester, Baroness Pontalba. The only child of Don Andres Almonaster y Rojas, a leader of one of the oldest Creole families in New Orleans, Micaela was born in 1795. Don Andres died in 1798, leaving the baby Micaela sole heiress to his fortune. Her family arranged a marriage to her cousin, Xavier Celestin Delfau de Pontalba. Xavier was the oldest son of the baron, Joseph Delfau de Pontalba. The couple moved to France, where the elder Pontalba was constantly scheming to acquire Micaela’s fortune, eventually shooting her with a dueling pistol in 1834. Micaela survived, but the baron committed suicide with the same set of pistols.” 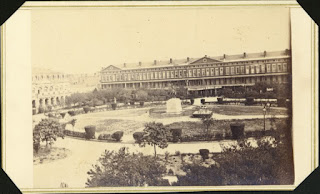 Jackson Square and the Lower Pontalba building, 1860s (LA State Library photo)
“In order to increase the rental value of her apartments, Micaela was one of the leaders in the effort to rename the Place d’Armes after the hero of the 1815 Battle of New Orleans, General (later President) Andrew Jackson. The square’s name was changed, and city leaders purchased an equestrian statue of Jackson from the sculptor Clark Mills in 1856. The square was converted from a military parade ground and execution site (runaway slaves and others committing crimes were often hanged in the Place d’Armes) into the peaceful park we know today.”
https://www.google.com/search?q=jackson+square+new+orleans&hl=en&tbo=u&tbm=isch&source=univ&sa=X&ei=11HUUIu-FqPW2gW664GYCQ&ved=0CEwQsAQ&biw=1366&bih=624 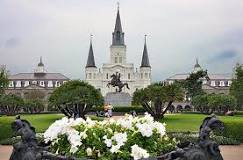 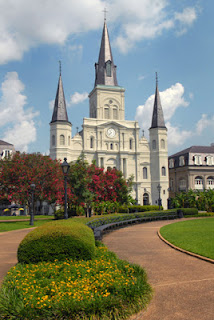 Our last night in New Orleans was breathtaking!  The Christmas spirit, unique history and the food; almost too much to handle all at once!  The St. Peter Clavier Gospel Choir was the highlight of the evening at the Saint Louis Cathedral http://www.youtube.com/watch?v=ZkiKo-8NwW4.  Connecting the amazing history of New Orleans while enjoying delicious Creole food at Cafe Pontalba http://en.wikipedia.org/wiki/Louisiana_Creole_cuisine inspired us to plan a return visit.  We were at the epicenter of 200 years of history dating back to the War of 1812, including the final Battle of New Orleans in 1815, the Pontabal Aparments, Jackson Square, and the Saint Louis Cathedral…  WOW!

Farewell New Orleans…  We’ll be back…

Steve Sparks is a retired information technology sales and marketing executive with over 35 years of industry experience, including a Bachelors’ in Management from St. Mary’s College. His creative outlet is as a non-fiction author, writing about his roots as a post-WWII US Navy military child growing up in the 1950s-1960s.
View all posts by stevesparks →
← "Aloha" Senator Daniel Inouye - Honoring WWII Heroes! A True Oasis - Hotel El Capitan - Van Horn, TX in the Texas Mountain Trail Region... →