http://en.wikipedia.org/wiki/Second_Seminole_War  Quote from this site…

“Peace had come to Florida for a while. The Indians were mostly staying on the reservation, but there were minor clashes. The Florida authorities continued to press for removal of all Indians from Florida. The Indians for their part tried to limit their contacts with whites as much as possible. As time went on there were more serious incidents. The government resolved once more to remove all Indians from Florida, and applied increasing pressure on the Seminoles until they struck back, starting theThird Seminole War of 1855-1858.[78]“

http://www.healingcombattrauma.com/2010/08/native-americans-and-the-warrior-spirit-storytelling-for-healing.html  Quote from this website…
From the National Museum of the American Indian (part of the Smithsonian), a “workbook” online called “Coming Home: Strength through Culture.”
From a segment entitled, “Healing after the War”:
“According to American Indian traditional beliefs, war affects a soldier’s well being, and makes it difficult for him to live in the everyday world. For American Indians, returning home means returning to a place — a land, a community, a family, and a culture — that you are part of, a place that you have a special relationship with. Participating in war interferes with your ability to be part of this place. It upsets the balance of life. This is why American Indian cultures have special ceremonies to help bring the soldier’s life back into balance — to make it possible for the soldier to once again live in peace and to be physically, spiritually, emotionally, and mentally healthy.”
http://www.nationalparks.org/explore-parks/everglades-national-park 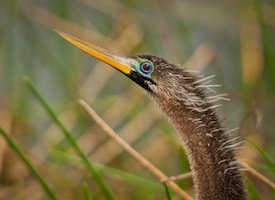 © Dave Krantz
A bird of southern swamps, the Anhinga is known as the Water-Turkey for its swimming habits and broad tail, and also as the Snake-Bird for its habit of swimming with just its long head and neck sticking out of the water.
﻿

Driving further south to the Everglades is a surreal experience, especially the massive swamp lands covering thousands of square miles.  Southern Florida is referred to as the “river of grass” and Florida Bay, the southern most tip of Everglades National Park, is called the “bay of 10,000 islands.  Some even call southern Florida the “land with 10,000 lakes” http://en.wikipedia.org/wiki/Pond. I thought Minnesota was the only USA State given this honor.  The facts, however, show Florida with almost 8,000 lakes and 10,000 miles of streams and rivers. http://myfwc.com/fishing/freshwater/sites-forecast/bream/

The history of this land includes the Seminole Warrior and the wars with early Americans who were fighting for the land.  Everywhere we travel it seems there is history of early American veterans, including American Indians who struggled and died protecting the spiritual lands they loved.http://www.flheritage.com/facts/history/seminole/wars.cfm  The 2nd Seminole War referred to above is an example of one of a series of wars fighting for the swamp lands, water rights, fishing grounds, and agricultural bonanza represented in southern Florida.  The road to Homestead, Florida shows the abundance of agriculture and nursery farms that grow tropical fruits, trees and plants sent around the world.

My travels have helped me become highly aware of the challenges of life after war for these early American warriors who showed the same symptoms of moral injury and PTSD.  Early Native Americans are considered model examples of how to help warriors return to a healthy homecoming following war.   Reference the above quote from “Healing After War,” from the workbook, “Coming Home: Strength through Culture.”

While we focus on the present and past wars of America since the Civil War, and the struggles of life after war, it is wise to honor and learn from Native Americans the value of “healing the soul.”

Steve Sparks is a retired information technology sales and marketing executive with over 35 years of industry experience, including a Bachelors’ in Management from St. Mary’s College. His creative outlet is as a non-fiction author, writing about his roots as a post-WWII US Navy military child growing up in the 1950s-1960s.
View all posts by stevesparks →
← Dania Beach Florida...Hanging out with gratitude... Young Life - Spiritual and personal growth for young adults... Meet my grandson Joey pictured in the photo above to the right of me with my four grand children... →