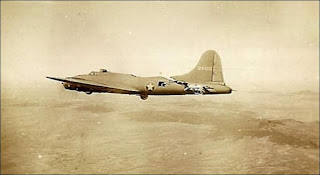 B-17 in 1943 A mid-air collision on February 1, 1943, between a B-17 and a German fighter over the Tunis dock area, became the subject of one of the most famous photographs of World War II.

WWII B17 Mid-Air Collision & Survival  Click on this site!

“The weight of the gunner was adding some stability to the tail section, so he went back to his position. The turn back toward England had to be very slow to keep the tail from twisting off. They actually covered almost 70 miles to make the turn home. The bomber was so badly damaged that it was losing altitude and speed and was soon alone in the sky. For a brief time, two more Me-109 German fighters attacked the All American. Despite the extensive damage, all of the machine gunners were able to respond to these attacks and soon drove off the fighters.”
#####

The stories of WWII and the “Greatest Generation” continue to inspire us all…  The heroism and dedication to duty while protecting our freedoms at this critical time in history, should never be forgotten.  These stories often come to me from boomer friends who’s father’s served in WWII.  Many of we boomers are just beginning to learn about the sacrifices of WWII by our own families who never talked about it.  The warriors of WWII suffered in silence often for a lifetime.  They lived with extreme guilt from losing “battle buddies,” observing and experiencing severe trauma for months at a time in the heat of battle.  Families who are now revisiting the past are starting a long delayed journey of healing by learning about their loved ones who served with honor and pride.  We are also learning how and why so many lived with emotional pain and the symptoms of PTSD for a lifetime.  There was little or no discussion, no outreach, no treatment, no awareness for decades.  Wars never end for many combat veterans who return home to life after war nor the families who served too.   Please remember your own families sacrifices by doing research and sharing with grandchildren and other loved ones who must learn and appreciate the sacrifices of veterans of all wars.  It is never too late to begin the journey of healing for families who are still in shock from generations of war and trauma that lives on in life after war…

Steve Sparks is a retired information technology sales and marketing executive with over 35 years of industry experience, including a Bachelors’ in Management from St. Mary’s College. His creative outlet is as a non-fiction author, writing about his roots as a post-WWII US Navy military child growing up in the 1950s-1960s.
View all posts by stevesparks →
← When we hear about a suicide it is too late! Human connectedness & mindfulness are critical to suicide prevention... Healing is a journey... How do we know to say the right thing at the right time and under the right circumstances? →