“Suck it up, soldier, go home and forget about the war!” 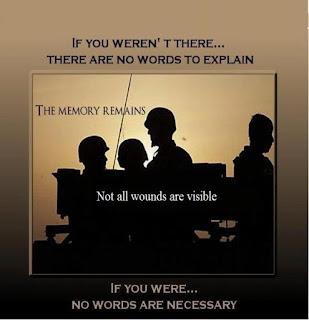 “That’s not to say that every case of a soldier committing a crime or committing suicide wasn’t caused in some way by PTSD, but what about the thousands upon thousands of soldiers and veterans out there who have PTSD or combat stress and never do anything bad to themselves or others? We veterans, the military, and the media need to stop jumping to conclusions and making assumptions.

“I think that this is the most important point that the military and the VA need to grasp. Most everything in war is not natural so when a soldier has a negative reaction, that is actually a natural reaction to a negative thing. When we put on the uniform, contrary to what some activists might think, we don’t give up our humanity. We aren’t permitted to commit war crimes simply because we are at war, even though we have to endure stress and hardships and killing. There is nothing that says we aren’t permitted to still be human though.”

I am always concerned that we can easily conclude that “all soldiers come home from war with emotional challenges.”  But at the same time, I don’t want to see America return to the pre Viet Nam period of simply saying to our combat veterans to “suck it up.”  My own experience growing up with a parent who tried to “suck it up” is proof that this approach is wrong, dead wrong.  There is too much at stake when we brush off the damage war can do to an estimated 20% of our soldiers returning home to life after war.  If we are not vigilant in encouraging veterans to seek help and reach out to regain the balance they once had prior to experiencing combat, the baggage is still there, and more seriously passes on to loved ones who are at the receiving end of the internal struggle to reconcile feelings of anger, anxiety, and depression.   Although we are still dealing with the stigma of mental health challenges in a soldiers life after war experience, we should continue a campaign of awareness so that those veterans who do need help will feel comfortable seeking help, and will not hesitate because they feel somehow less than human or trained to “suck it up.”  I spent my childhood in a “fox hole” culture, feeling like we were all sailors in the US Navy at sea fighting a war.  Kids need to be kids and be given the opportunity to grow up in the most loving, healthy and positive conditions to become responsible, productive, and happy adults.  Under these most favorable conditions, children are more likely to be equipped to handle the stress of war more effectively if they choose a career in the military…

Steve Sparks is a retired information technology sales and marketing executive with over 35 years of industry experience, including a Bachelors’ in Management from St. Mary’s College. His creative outlet is as a non-fiction author, writing about his roots as a post-WWII US Navy military child growing up in the 1950s-1960s.
View all posts by stevesparks →
← We need to talk more about "Secondary PTSD" and the suffering of military family members... Blog Radio Talk for Warriors and Loved Ones... How to talk to veterans returning home from war... →