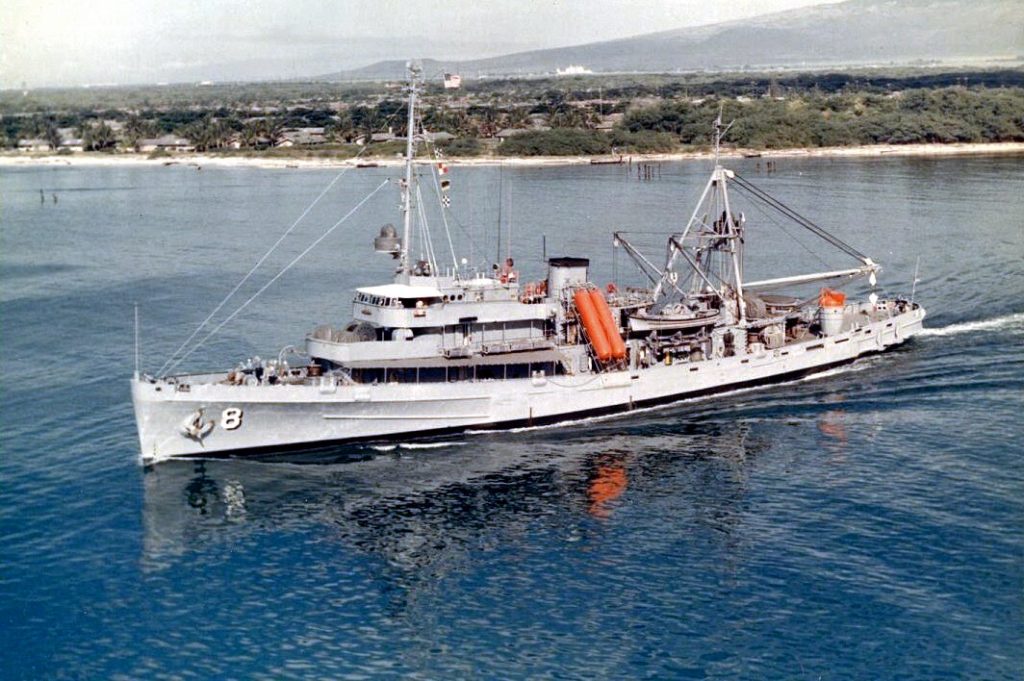 Most folks know that writing has been a critical source of healing for me. I started writing this blog in April 2011 on the encouragement of my dear friend and best buddy Byron Lewis. Byron passed away in October 2018 after a long battle with cancer. I miss Byron everyday, but he still taps me on the shoulder to help me get back on the right track. Byron encouraged me to keep writing before he passed. I honor my ol’ surf dude pal, Byron, with this first installment of a new series of lessons learned in life…and my personal journey of healing… Bryon also helped me edit my books and contributed to this blog over the years…click here.

Back in the day we surf dudes would look at each other when a bad wipe out was imminent and say, “when you’re fucked you’re fucked!” That’s exactly how I felt at the beginning of this story so very long ago…

It was a gorgeous sunny morning in January 1965 cruising around Oahu near Makaha Beach aboard the USS Coucal (ASR8); a submarine rescue and salvage ship, shown in the above photo…click here. I only have surreal foggy memory from that moment. I was on a break and looking on shore off of Makaha Beach. We were about a football field from shore. I could see surfers taking off on beautiful glassy waves when I dreamed of being on my board waiting in the pocket for the perfect wave. I could feel the waves under my feet, the freedom and control of my destiny for a moment in time…a true mindfulness escape that allowed me to forget everything painful. Impulsively, I just jumped in and swam to shore! Last I remember about that moment so long ago is being at Treasure Island in San Francisco in August 1965, transitioning out of the US Navy with an early honorable separation.

I suffer from significant memory loss over a lifetime, especially during early childhood, teen years, and as a young adult. With a much higher level of awareness from Trauma Informed Care and personal treatment and recovery strategies, my memory is returning little by little and helping me get the closure I so desparately need to finally heal from the too terrible to remember younger years.

This was the beginning of 6 decades of running away from mental illness, searching for my soul with a desparation to find my truth and a passion to succeed as a worthy and honorable man. I wanted to prove that mental illness was not possible in my life. At age 19, I didn’t even understand the depth and breadth of my sickness from a terribly abusive and sick childhood that included surviving polio at age 2. What happened? How could I get out of this outrageious disaster? All the rotten memories were blocked out during that time, denial was the only logical direction for me. I would not last 2 minutes on the outside if anything was revealed about my mental illness. My life was on the line. There was no way out but denial. What else could any young man do in my shoes at that time, but pull up his boot strapes and learn how to survive. I felt extreme shame and guilt for letting the Navy down and my family. I believed I was crazy and couldn’t imagine talking about it, not once, not ever!

I was reassigned as a Radioman 3rd Class from Comsubpac/Comsubflot5, a highly secure communications center at Pearl Harbor subbase to the USS Coucal in January 1965. I was given this assignment as a lighter duty station while in treatment and recovery for a diagnosis of acute agitated depression and anxiety…click here. The Coucal was supposed to be an opportunity for me to work in a less stressful duty station, but the temptation of seeking refuge to what felt the safest spot on earth to me at the time was my surfboard. Without hesitation, and in a surreal state of panic, I jumped in to join my brothers in the surf at a familiar and favorite surf spot on Oahu. I was a strong swimmer and in great shape, so swimming to shore was a piece of cake.

I was completely unaware, ignorant, and immature during my early struggles with mental health. Mental illness was a very bad thing to happen to a young man serving with pride and honor in the US Navy. My father, a highly decorated WWII US Navy veteran, Pearl Harbor survivor, Pacific War, and Korean War, would no doubt beat the crap out of me while asking me once again for the millionth time, “what is wrong with you?” There was never a conversation about what happened back then or how to help a young man suffering from mental illness. If you were diagnosed with mental illness, life as a normal person would end. I would be seen as a ‘weak sister’ (vernacular term for weak dudes). I do see my father now with a different perspective. He suffered all his life with mental illness and didn’t have a way to treat his PTSD and major depressive disorder until later in life. My mother and all of us siblings suffered the same, living a life of emotional baggage.

I was never told of my specific mental illness diagnosis when leaving the Navy in August 1965. I learned later that my father was contacted by the commanding officer of Comsubpac and provided an update on my mental health circumstances. The first time I got a hint of it was when seeking a vocational position as a teletype technician with General Tel in Los Angeles in September 1965. At that time medical records of veterans were not sealed, so I was screened out for having a mental illness diagnosis from the US Navy on my DD214. Isn’t that the shits? Imagine how a young man age 19 might feel being told for the first time by a lay person that he is mentally unstable?

As a result of my own traumatic life experiences as a child, it is horrific for me to think of a child living in a profoundly dysfunctional home…click here. I cringe thinking about how children inhale the pain of parents suffering and the chaos presented in troubled homes across America. There are too many kids in my community who are damaged emotionally and morally for a lifetime following a childhood of abuse and maltreatment, including being exposed to substance abuse, addiction, and violence that serves as an intergenerational problem. Reach out to children and families who need community support. We know now with evidence based facts that finding ways to support kids who come to school with challenges early in life will help heal moral injuries that persist over a lifetime. We must stop the cycle of intergenerational pain, and it starts with all of us making a difference each and everyday.

Best wishes in your journey of healing,

Steve Sparks is a retired information technology sales and marketing executive with over 35 years of industry experience, including a Bachelors’ in Management from St. Mary’s College. His creative outlet is as a non-fiction author, writing about his roots as a post-WWII US Navy military child growing up in the 1950s-1960s.
View all posts by stevesparks →
← Ask What Happened, Not What is Wrong! On the Brink! As a Young Adult Serving in the US Navy 1965... →