Remembering our Courageous and Loving Mothers from the “Great Depression” and WWII years.

On this Mother’s Day, I will honor my mother with the following excerpt from my book, Reconciliation, A Son’s Story by Steve Sparks.  Marcella C. Sparks is now 92, still tough as nails, living comfortably in Reno, Nevada surrounded by loving family members. 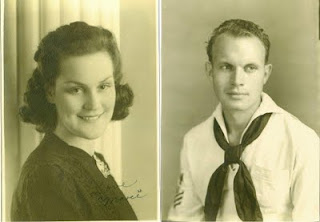 Marcella and Vernon Sparks
“Growing up during the “Great Depression” years was a huge disadvantage for women during my mother’s time.  Most women had to quit school at an early age like my mother.  They needed to get to work early on and try and find a husband to start a family as a way to survive.  Women today are lucky and blessed to have the opportunity to look past a 7th grade education and hold off getting married and starting a family too early with often disastrous consequences.  In the case of my Mother, Marcella, she made it through the 7th grade then started working to help her family during these challenging years.  Yes, she had dreams has a young women, most did at that time.  But those dreams gave way to the realities of the times.  Women were not considered productive in the broader economy and assumed to be homemakers at best, with little or no opportunities for even completing high school let alone entering college and pursuing a career in a male dominated world.
Mother met Dad not too long after he entered the US Navy in 1936.  Of course, he was rarely home between the time they started courting each other and the time they were married in 1940.  Mother was good friends with Dad’s sister Junith during that time, so this became the connection to my mother’s chances of succeeding in finding a husband and having a family as the ideal way to survive during this time.  Not too long after they were married Dad was off to sea duty again right after she became pregnant with my older brother Jerry.  The Japanese attack on Pearl Harbor in December of 1941 created an impossible situation for a new marriage to thrive and grow.
My Dad was gone, really gone, and Mother was not sure he would even come back.  Consequently, many women of that time ended up being single parents, without an education, alone without a husband or friends or even a job.  Pile on the depression years growing up and the trauma of WWII and you get an awful case of PTSD that starts to affect the kids before “battle fatigued” Dad arrives home from the war.  Mother was a basket case by the end of WWII as were no doubt many thousands of women in the same position at that time.  Newly married, small children, no husband, no money, lonely, and uneducated; a very negative combination of challenges and hardly anyone cared or even thought about it.  These wives and mothers had to tough it out on their own since their war hero husbands were sacrificing their lives in Europe and in the Pacific.  As a kid during the war my brother Jerry carried the most burden of living with Mother during that time.  My guess is Jerry had to grow up really fast.  And his story will come later.”

Steve Sparks is a retired information technology sales and marketing executive with over 35 years of industry experience, including a Bachelors’ in Management from St. Mary’s College. His creative outlet is as a non-fiction author, writing about his roots as a post-WWII US Navy military child growing up in the 1950s-1960s.
View all posts by stevesparks →
← Our heroes from WWII did not receive adequate diagnosis or treatment for PTSD or "battle fatigue." Is "homemaking" still a viable choice for the modern woman? →