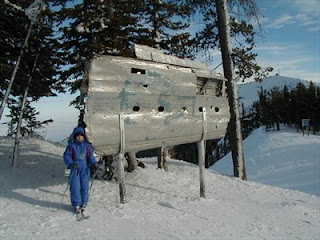 This is what is written on the plaque:
“On a stormy night of September 30, 1944, Flight Crew 22, on a training mission from Walla Walla Army Air Base, found itself off course and lost above the rugged Cascade Mountain Range.

They were flying a B – 24 “Liberator” Heavy Bomber. The night was rainy and the valley was enshrouded with heavy fog. Around 8:00 p.m. the Beehive Lookout reported Hearing the drone of a planes engines as it passed directly overhead.

Within moments a fire was seen faintly illuminating the fog, alerting the lookout that the plane had probably crashed. Due to the darkness, weather. And terrain, search efforts were delayed.

The next morning when a rescue party reached this rocky bowl, just 500 feet below the crest of Mission Ridge, they found the flames had been extinguished by the heavy rainfall from the previous night.

Pieces of the wreckage were strewn hundreds of yards across the slope and the bodies of all six crew members were found. There were no survivors. – USFS, Vets of Foreign Wars of the U.S., Mission Ridge, Boy Scout Troop 5″

North Central Washington was our home for 15 years.  Mission Ridge near Wenatchee was our favorite ski resort and where, little Sarah, learned how to ski at age 4.

Judy and I enrolled Sarah in the “Kids Club Ski School” and she became a star…  Sarah was a poster child at http://www.missionridge.com/ for quite awhile.  Mission Ridge was kind enough to give us a copy of the poster when we complained that permission was not given by us to advertise our little girl all over the world.

So, Sarah learned how to ski and she loved it.  She would always tell me, “Daddy, I can do it.”  And still tells me so today at age 25…

Mission Ridge offers some of the best powder skiing and moderate to advanced runs in Washington State.  It is also the crash site of a WWII “Liberator” B24 aircraft that was on a training mission.  There were no survivors.

Mission Ridge honors the service and memory of the men who died protecting the freedoms of American citizens with “Bomber Bowl” a fun moderate ski run on the mountain.

When entering the area there is a piece of the Boeing B-24 Bomber Wing shown in the above photo for all of us to be reminded of the sacrifice of WWII.  The brave men who died here and veterans of all wars are honored at Mission Ridge Ski Resort and Lodge at the base as well.

The memories of Mission Ridge and our family experience will be remembered forever.  The poster shown above sits prominently in our home to this day.  Sarah can have it back some day to share with her children and grand children…  For now, we are holding on to it!

Steve Sparks is a retired information technology sales and marketing executive with over 35 years of industry experience, including a Bachelors’ in Management from St. Mary’s College. His creative outlet is as a non-fiction author, writing about his roots as a post-WWII US Navy military child growing up in the 1950s-1960s.
View all posts by stevesparks →
← Women in Combat...James Robert Webb...USMC Infantry Sgt, Embedded Photographer for Parade Magazine... No excuse for high unemployment rate for veterans returning home to life after war!!! →