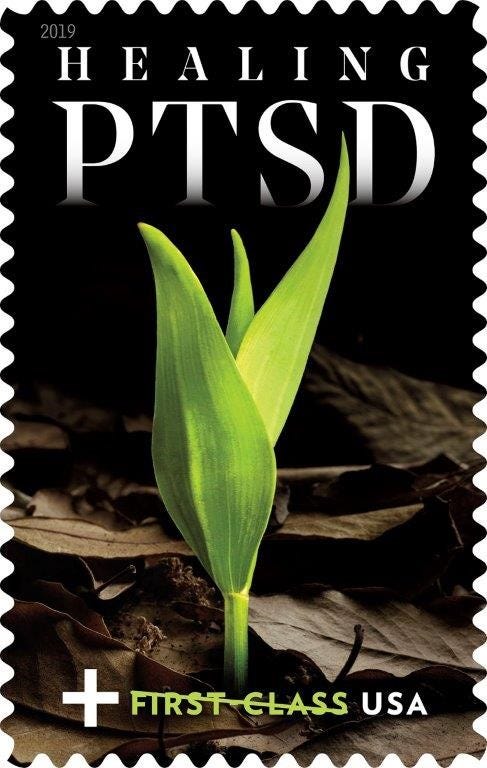 Buying a new stamp from the USPS will help raise funds for veterans with post-traumatic stress disorder.  BUY on my Amazon page below!

I’d say we’ve come along way since WWII in acknowledging and treating the affects of trauma and PTSD. It still hurts me to think about my father, Vernon’s suffering from WWII and Korean War, including Pearl Harbor.

Aa a post WWII family, we served too, just the same as military families from all wars in the history of modern warfare. I served in the US Navy and was injured aboard ship, but not in combat. PTSD is not limited to combat, but be any injuries connected to truams, war or otherwise.

My father suffered all his life without adequate treatment. I watched him in terrible pain, but didn’t know why. Mostly, it came out in anger and rage.

We knew he drank a lot. Most warriors did, especially sailors, we always thought. Alcohol went unchecked, and considered the only medication for our heroes in serious physical and mental pain.

PTSD is a terrible tragedy for anyone suffering from severe trauma. Unimaginable horrors happens to soldiers in battle on the front lines and at sea.

Dad watched his best friend and shipmate, Roy Powers, stick his head out the port side of the 3rd deck of the Battleship USS West Virginia on December 7, 1941.

Roy’s head was blown off from the concussion when the 2nd bomb slammed into the ship. Dad watched him fall back headless in that moment.

That was just a warm up for the rest of WWII Pacific before he finally came home in June of 1945. Imagine what plan he was living with in his heart and soul when he came home, a never ending pain, suffering continuously all his life.

Now, we know trauma well. Treatments and recovery are a reality, but always a lifetime work in progress. Surviving war looks like a God’s send, but it is more often than not unbearable emotional baggage for all warriors and the families who serve too.

We honor veterans of all wars. We honor them too for their invisible injuries that were ignored and treated as something wrong as opposed to what happened to them.

It’s never what’s wrong with a person suffering from traumatic injuries. It is always what happens to them. Once we ask that, we can help them heal.

Steve Sparks is a retired information technology sales and marketing executive with over 35 years of industry experience, including a Bachelors’ in Management from St. Mary’s College. His creative outlet is as a non-fiction author, writing about his roots as a post-WWII US Navy military child growing up in the 1950s-1960s.
View all posts by Steve →
← Rex Buck, Relentless Wanapum Man Dies... Boiler Bay Shipwreck Depoe Bay Oregon... →