Paul K. Buck, Vietnam veteran heals in life after war with his own moving poetry and work with the Museum of Military History in Kissimmee, Florida

In honor of veterans of all wars…

Changes
When he was a boy,
He dreamed a boy’s dreams
Of fishing and hunting
And other boy things
But as he grew older
Many things changed
His hopes and dreams
Had been rearranged
A job, a girl
A shiny new car
A place of his own
And traveling far
Then the winds of change
Again start to blow
In a far away land
To war he must go
He tells his girl
I’ll come back to you
But first this little job

That I just have to do

He’s just not the same

That she sees in his eyes

So they drift apart
And go their own ways
As alone in his heart
For forgiveness he prays
Paul K. Buck
Paul was drafted in Oct. of 1965 and completed basic training at Ft. Knox, Ky. From there he went to Ft. Sill for AIT (Advanced Individual Training) on the 155 Howitzers.  He also volunteered  to attend cook school for six days. Paul shipped out with C Btry. 6th of the 16th Arty. in May of ’66 for Vietnam.  Paul went over as a “bastard” Battery without a division.  His team was attached to the 1 st. Cav. Division in the central highlands of Nam.  Paul explains that the tour was pretty boring and uneventful with the exception of a few sniper and mortar attacks on our LZ’s. (landing zones)  All of this changed when his team experienced a Howitzer blow up, killing four guys and wounding many. That was a very bad day for Paul because one of his buddies was cut almost in half starting at the shoulder and going down across his body to the waist.  He was burned almost beyond recognition and the smell of burning flesh still lingers in Paul’s mind…
I had the honor of meeting Paul K. Buck this week at the Museum of Military History during an open house to launch a “German POW” traveling exhibit showing the history of WWII German POW Camps in Florida and the stories of POW’s from 1942-1945.  Paul is a quiet man with a heart of gold.  He feels blessed in his life, but also struggles with the painful memories of war.  His poetry is a source of healing and to listen to Paul recite verses is moving and captivating.
Paul lost the love of his life, wife Linda, to breast cancer not very long ago.  He gives his wife credit for keeping him on his feet in life after war.  The journey of healing for warriors and others who suffer from moral injury and the symptoms of PTSD has a deep and loving connection to loved ones.  Paul now lives with his brother, Brad, in Florida, who is at his side providing love, friendship and moral support.
Quoting Paul K Buck, “I have no idea what the future will hold for me, but I pray for the strength to handle whatever comes my way.”   Paul thinks of the guys we lost everyday and has a hard time talking about it sometimes.  But he has always tried to be as open as possible so people will understand that a heavy, heavy price has been paid for all the freedoms we have.
Steve Sparks, Author, Reconciliation: A Son’s Story
http://www.museumofmilitaryhistory.com/ 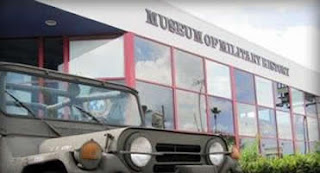 “Museum of Military History provides a historical glimpse into our military heritage.”

…with heroic accounts of bravery and sacifice, from those who have fought to maintain our freedom!

Steve Sparks is a retired information technology sales and marketing executive with over 35 years of industry experience, including a Bachelors’ in Management from St. Mary’s College. His creative outlet is as a non-fiction author, writing about his roots as a post-WWII US Navy military child growing up in the 1950s-1960s.
View all posts by stevesparks →
← Veterans Day 2012 - We Salute Vietnam War Veterans... A special tribute "50 Years Later" from USA Today and National Geographic Channel... Ft. Lauderdale/Pompano Beach, Florida... Are we really this far from home in Depoe Bay, Oregon? →