“Oregon Honor Flight” helps America’s veterans for all their sacrifices by transporting our heroes living in Oregon to Washington, D.C. to visit and reflect at their memorials.

Transport America’s veterans to Washington, D.C. to visit those memorials dedicated to honor their service and sacrifices. 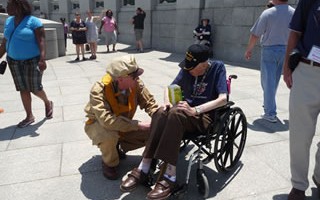 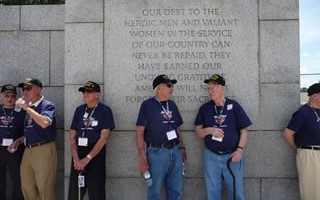 “South Willamette Valley Honor Flight is registered with the State of Oregon as DBA  Honor Flight of Oregon, and is a proud member of the Honor Flight Network. Honor Flight of Oregon is a non-profit 501 (c)(3) organization and all donations made are tax deductible. Created solely to honor America’s veterans for all their sacrifices we transport our heroes living in Oregon to Washington, D.C. to visit and reflect at their memorials. Top priority is given to the senior veterans – World War II survivors, along with those other veterans who may be terminally ill.”

I remember when my Dad, Vernon, US Navy WWII and Pearl Harbor Survivor was sent to the Pearl Harbor Memorial on the 50th Anniversary over 25 years ago.  I write about my father’s experience in WWII and the Korean War in my book, Reconciliation: A Son’s Story.  Our family story living and coping with PTSD in those post WWII years is just one of thousands of stories of the challenges of life after war…

Dad suffered with severe symptoms of PTSD all of his life, passing away in 1998.  It was exceedingly painful for him and our family, especially during the “too terrible to remember 1950’s.”  The trip to the Pearl Harbor Memorial 50th Year Anniversary (images)and receiving honor and respect for serving America during the Japanese attack on Pearl Harbor on December 7, 1941, was a turning point for my father.  He finally started his journey of healing after so many years of keeping the pain bottled up inside.  Neither Dad nor our family understood the life long mental health challenges of PTSD.  We really had no idea of Dad’s emotional pain and how it was affecting our family directly.

As for my own journey of healing, I dedicate this blog and my book to the veterans of all wars and others, i.e., 1st responders… Help aging veterans heal and gain some peace of mind during the last years of their life, by sending them to Washington D.C.  To help my readers understand the trauma connected with a combat experience, following is my father’s first hand account of his experience aboard the USS West Virginia (BB48) on that Sunday morning December 7, 1941, “The Day of Infamy.”

“I was on the 3rd deck heading for the anchor windless room when the first torpedo hit the USS West Virginia.  From there, more bombing and torpedoes-when all hell broke loose.  Men in the brig were screaming for help.  I could not respond, there was no time…to check where the Marine guard was with the keys to the cells.  Evidently, he had already been hit.  The men in the brig were engulfed in water and perished.  I worked my way up to the 2nd deck with water up to my waist.  By this time, I came to a hatch with the manhole still open leading to the main deck.  I barely made it out of the escape hatch and was ordered by Lt. Stark to close that hatch.  The men were still down there but it was too late for them.  That was the first time I heard that the Japs were attacking our fleet…and the whole island.  I watched one of my best shipmates get himself killed-Roy Powers.  He stuck his head out the portside close to the ship-fitters shop; and about that time another torpedo hit and the concussion blew his head off.  His body fell back on deck headless.  After that it was a matter of surviving.  There was no defense, the ship was already listing to port at about 35 degrees angle.  I worked myself up further on the deck and observed the Commanding Officer, Captain Mervyn S. Bennion heading for the bridge.  The strafing and bombing was still on.  When I arrived on the main deck going forward to the number one turret…strafing still going on…I dived under the overhang of the turret.  Communications was out, so by word of mouth heard the order, “all hands abandon ship.”  Note: Capt. Bennion was lying on the wing of the bridge mortally wounded…He asked the doc, “What kind of chance he had?”  And was told, “Not much Captain.”  Then, Captain Bennion said, “Leave me on the bridge and this is my last order, ALL HANDS ABANDON SHIP!”  He died right after that order…  After that order I jumped over the side to starboard and swam to Ford Island…Us guys that made it were standing on the beach watching the USS Arizona blow up sky high…what a helpless feeling.  I had torn my white uniform up to use as emergency treatment bandages for the wounded.  Anyway, to make a long story short, we dashed across the field under strafing conditions to shelter.  In the BOQ, we were able shower in there and salvage clothes from the lockers, and helped organize the Harbor Patrol.  And was with that duty for a few months – then assigned to new construction with the 5th Amphibious Force hitting the beaches of the South Pacific, all the way, then finally Iwo Jima, & Okinawa until the Peace Treaty was signed aboard the USS Missouri in Toyko, Japan.   People like myself could go on & on…but that would take a book…”
Vernon H. Sparks, December 7, 1941, Battleship USS West Virginia
From Ship’s Crew Muster:
Sparks, Vernon H.       328-41-29     Cox.        13   Jan. 36   10/12/39
Steve Sparks
Author
To read more order my book, Reconciliation: A Son’s Story.

Steve Sparks is a retired information technology sales and marketing executive with over 35 years of industry experience, including a Bachelors’ in Management from St. Mary’s College. His creative outlet is as a non-fiction author, writing about his roots as a post-WWII US Navy military child growing up in the 1950s-1960s.
View all posts by stevesparks →
← Soldiers and 1st responders believe "empathy" from family members and loved ones help them heal... "INVISIBLE CASUALTIES!" These stories are not easy to digest, but awareness is the first step in saving the life of a loved one... →