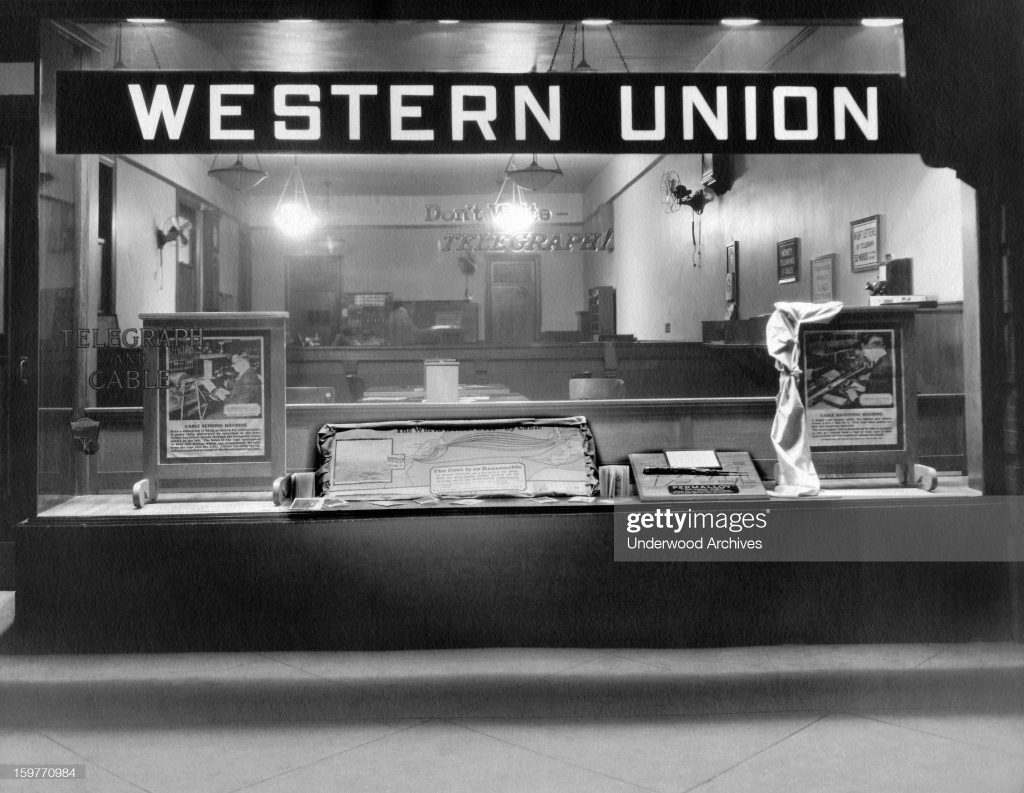 “A resume of some of the facts is as follows: At about 10:15 a.m. on September 5, 1966, Hazel O’Neil and Leamont White were employed as money order clerks at the main office of Western Union at 741 South Flower Street in Los Angeles.

At about that time and place appellant and codefendant Kinnard entered with drawn guns. Kinnard jumped over the counter and demanded of O’Neil and White the money from the cash drawers and the safe. Kinnard struck O’Neil on the arm and told her to step back. Kinnard took about $35 from a drawer.

Christian with a revolver in his hand was in the lobby of the office less than ten feet from O’Neil. A woman screamed, appellant hit her with his gun, and then called out to Kinnard, “Let’s get out of here” whereupon Kinnard jumped over the counter and the two robbers left the office. At this time O’Neil activated a buzzer under her cash drawer.”

The VT WU office one night around 10pm

About that same time, I was working at the Vermont office of Western Union as a sales clerk at the counter. My shift was from 2pm-11pm.

It was a typical night in the City. I loved working with my soul brothers ‘n sisters.

Yeah, I was a blond young surf dude, who looked lost in a black neighborhood in Watts back then. But, it was here I fell in love with soul food & jokin’ sisters ‘n brothers I learned to love.

I drove each day to the office from Hermosa Beach. I could get home by midnight, do a little homework from college, and get to bed by 2am.

I’d get up about 9am, grab my Greg Knoll long board and head out to catch some waves at 22nd Street for a couple of hours. Then, it was time to get serious again about driving to my office in Watts.

My work was fun

Yvette, my boss, was a pretty lady around 30 years old, and very kind to me. We worked well together. I think we liked each other a lot, in fact. We partied together after work sometimes too.

She showed me the ropes of running a WU retail store front. Taking cash over the counter to send money around the globe was the big event back then.

Most folks couldn’t receive or send money any other way. Checking accounts? Visa cards? Not a chance.

Yvette was responsible for routing telegrams for delivery by bicycle messengers, who knew the streets and gang neighborhoods too. I started learning how to do that job too. I loved to joke around with my black brothers who worked there.

They took me next door to Mama’s Soul Food Restaurant for dinner most nights around 6pm. I loved soul food and still do, when I can find it. But never like that, not ever again.

About 10pm I was at the counter when 2 black dudes jumped over the counter. I was shoved to the floor while one of them said, “don’t move white boy, or you be dead!”

The other dude grabbed Yvette and forced her to empty the cash drawer. Think they got a few $100 in cash. Then, jumped over the counter and disappeared while the sirens could be heard from a distance.

After the last robbery

This was the 4th time I was involved in a robbery at the VT office. Next day, I asked for a transfer to Redondo Beach, and hated that. I really missed my soul brothers ‘n sisters after that, and still think of them fondly this day.

This is when I really started to feel connected to people who related to me. I felt their souls, and loved soul food too.

Steve Sparks is a retired information technology sales and marketing executive with over 35 years of industry experience, including a Bachelors’ in Management from St. Mary’s College. His creative outlet is as a non-fiction author, writing about his roots as a post-WWII US Navy military child growing up in the 1950s-1960s.
View all posts by stevesparks →
← "Depoe Joe" The Early Days of Depoe Bay, Oregon... "What does a Lincoln County Oregon Commissioner Do, Anyway?" →