I was deeply moved yesterday while talking with Circe Olson Woessner, executive director of the new Museum of the American Military Family… in Albuquerque, New Mexico.  We talked for a long time about how children and families of the Armed Forces of America serve too, and long after the end of any war.  My memory continues to return little by little of a toxic and painful childhood as a military “brat” born right after the end of WWII.  But not every story of life for a military family should be considered “painful” or…a life experience we military kids should not feel proud as members of the military family serving America.  We now have a better understanding of the challenges of combat veterans of all wars, representing over 20% of the military service population, especially with children and families as a whole.  But often my posts dwell too much on the negative even though it is in the context of healing.  I am happy to be reminded of all the positive aspects of American military family life through the generations.

We lived in a “Quonset hut” (720 sf) on the US Naval Base in San Diego following WWII when Dad was stationed at the US Naval Training Center.  Later we moved to a typical type neighborhood in Imperial Beach on Holly Avenue,  known today as Holly Square, reserved for military housing.   Talking to Circe and browsing the referenced websites helped me remember our home on Holly Avenue as a young boy about 5-6 years of age.  I have vague dreamlike memories of playing in the neighborhood with my siblings.  Until recently most memories from my early childhood were repressed.  I continue to connect the dots while exploring my past…a very healing and mindful experience…

My father, Vernon, was stationed at the US Naval Training Center in San Diego following the end of WWII.  I remember the “hut” as a really small wide open home with no privacy whatsoever.  We didn’t like living in wide open spaces in those days like we do now because the dwelling was just too small for comfort and privacy.  I remember bits and pieces of playing with my siblings on the base, and the challenges of home life as a 5-6 year old kid…  But the life of a military child is character building in many positive ways.  We had to grow up fast and make adjustments that most kids don’t have to worry about.  We learned early how to survive and thrive as kids living a different kind of life in the military culture, including Dad’s deployment during the Korean War.  I also remembered a while ago, and wrote about when Dad returned home after almost a year serving on the USS Andromeda (AKA 15) during the war…

The “hut” shown in the below photo from the documentary film “Brats…Our Journey Home…”  helped me remember my early childhood on the US Navy Base in San Diego.  I added a second photo showing how a typical neighborhood of Quonset Huts looked from the air at Pt. Mugu in 1946.  Circe told me about the film during our phone conversation and sent me the link.  Click the film title caption in the photo advertisement below…

Making a new social network connection with Museum of the American Military Family… and friend, Circe, is a turning point for me on my journey of healing.  With this initial introduction, I plan to collaborate more with Circe, and share the proud and deep history of the American Military Family…  I am also proud and honored to be among the millions of military “brats” who served America too!

About the Film
Short Synopsis
“U.S. military BRATS share intimate memories about their unique childhoods – growing up on military bases around the world, then struggling to fit into an American lifestyle with which they have little in common. Narrated and featuring songs by Kris Kristofferson. Interviews include the late General Norman Schwarzkopf and military brat author Mary Edwards Wertsch.” 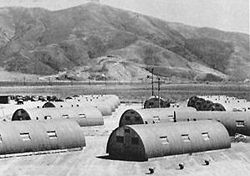 A Quonset hut is a lightweight prefabricated structure of corrugated galvanized steel having a semicircular cross-section. The design was based on the Nissen hut developed by the British during World War I. The name comes from their site of first manufacture, Quonset Point, at the Davisville Naval Construction Battalion Center in Davisville (a village located within the town of North Kingstown, Rhode Island, USA).

Medium Synopsis
“It’s hard to imagine a military BRAT’S childhood. Moving from base to base around the world, they are at home everywhere – and nowhere. There are 2 million children being raised in the military today. An estimated 15 million Americans are former BRATS. They include singers Pink and Lionel Richie, author Suzanne Collins (of the “Hunger Games”), basketball star Shaquille O’Neal and Heisman Trophy winner, Robert Griffin III, actors Julianne Moore, Robert Duvall, and Neil Patrick Harris, and many more.”

Steve Sparks is a retired information technology sales and marketing executive with over 35 years of industry experience, including a Bachelors’ in Management from St. Mary’s College. His creative outlet is as a non-fiction author, writing about his roots as a post-WWII US Navy military child growing up in the 1950s-1960s.
View all posts by stevesparks →
← 1st Responders live with memories of traumatic incidents and face a high level of stress... "Kids don't learn from people they don't like." In memory of Dr. Rita Pierson, a great educator who left us too early... →