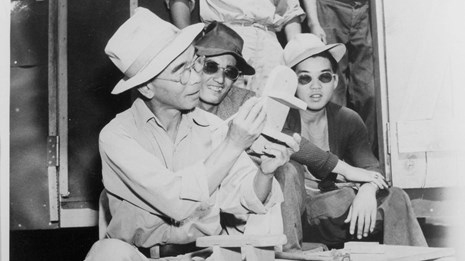 In 1942, the United States government ordered more than 110,000 men, women, and children to leave their homes and detained them in remote, military-style camps.

In 1942, the United States government ordered more than 110,000 men, women, and children to leave their homes and detained them in remote, military-style camps. Manzanar War Relocation Center was one of ten camps where Japanese American citizens and resident Japanese aliens were interned during World War II.

My mother told me stories about her Japanese American friends in Long Beach, California who were taken from their homes in 1942 shortly after the beginning of WWII.

She was a new military spouse and a young mother at that time following my father’s departure to the Pacific War during the summer of 1941 serving aboard the USS West Virginia.  My oldest brother was born three months before the Japanese Attack on Pearl Harbor on December 7, 1941.

Mother was shocked about her friends, who were Japanese but true American citizens, when they were taken away to internment camps.  While Dad was away at war, she recalled how close she was to her neighbors, including the Japanese Americans in Long Beach,

They helped each other while most husbands were deployed for long periods of time.  They gave each other comfort and hope that their husbands and loved ones would return home safe when the war was over…

Manzanar is one such Japanese Internment Camp located off Hwy 395 near Bishop, California, about 250 miles south of Reno, Nevada.  We took the time to stop and look at the camp, which is now well preserved as a National Historic Site.

“Manzanar National Historic Site was established to preserve the stories of the internment of nearly 120,000 Japanese Americans during World War II. It is to serve as a reminder to this and future generations of the fragility of American civil liberties.”

I often visit veterans memorials while traveling and write about our experiences to share with others the rich history of America at War and to honor veterans of all wars and the families who served too.

In the case of the Japanese Americans who were interned in camps like Manzanar. It is my view these good Japanese Americans served too…  Their service to America during WWII, while interned at Manzanar and other camps in the United States, clearly compromised American civil liberties in the interest of protecting American freedoms.

Although at the time the US Government felt Japanese Americans were a national security risk, we know now that we were wrong, very wrong.  We traumatized,  separated, and destroyed families, including the American dream for 10’s of thousands of Japanese Americans.

Steve Sparks is a retired information technology sales and marketing executive with over 35 years of industry experience, including a Bachelors’ in Management from St. Mary’s College. His creative outlet is as a non-fiction author, writing about his roots as a post-WWII US Navy military child growing up in the 1950s-1960s.
View all posts by stevesparks →
← Boiler Bay Shipwreck Depoe Bay Oregon... Ministry Group of Kajugangoma Centre Uganda... So Beautiful & Healing →