In honor of America’s sacrifice during WWII…a documentary from Steven Spielberg, historian Stephen Ambrose, and director James Moll present firsthand accounts of the Pacific Theater of WWII. This powerful documentary examines how brave young men and women dealt with being thrust into this brutal chapter of history.

A special bonus…my father’s account of his experience aboard the USS West Virginia on December 7, 1941… 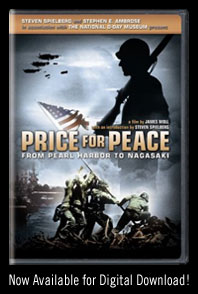 This powerful and thought-provoking film chronicles the compelling events in the Pacific Theater of WWII, from the bombing of Pearl Harbor in 1941 to the American occupation of Japan in 1945. It depicts the strength and courage of America’s youth, while examining how these young men and women dealt with being thrust into a brutal war.
The film includes interviews with war veterans, both American and Japanese, from all branches of the military. It features testimony from medics, nurses, dog handlers and Japanese Americans who were imprisoned at internment camps in the United States. The film also includes a first-hand account of the tragic impact of the atomic bomb on Japanese citizens. Among the veterans who appear is Zenji Abe, a Japanese veteran who flew the mission to bomb Pearl Harbor, and retired General Paul Tibbets who flew the mission to bomb Hiroshima.
Produced by Steven Spielberg and historian/author Stephen E. Ambrose
Directed by James Moll
Reviews:
• “A hard uncompromising look at the Pacific side of the World War II”  — Irv Letofsky, Hollywood Reporter
• “Demands to be seen”  — Robert Bianco, USA Today

Steve Sparks is a retired information technology sales and marketing executive with over 35 years of industry experience, including a Bachelors’ in Management from St. Mary’s College. His creative outlet is as a non-fiction author, writing about his roots as a post-WWII US Navy military child growing up in the 1950s-1960s.
View all posts by stevesparks →
← PTSD and The Effects on Generations of Children... Steve Sparks...Blog Talk Radio with Debbie Sprague on January 28, 2014... The loss of "trust" destroyed my post WWII & Korean War family unit! →