How an old shipmate remembers Dad is most touching on this Memorial Day.

Following is an excerpt from my book, Reconciliation, A Son’s Story.

Vernon  H. Sparks served on the USS Belle Grove (LSD2) in the Asiatic Pacific Theater during WWII from August 1943 to June 1945 just before the war ended.  The Belle Grove was at sea for 25 months before the first liberty.  The men serving on this war weary ship delivered troops and equipment and repaired other US Naval ships in seven campaigns during this period.  The USS Belle Grove became one of the most decorated war ships of that time and later served in Viet Nam as well.  These men were also responsible for transporting Marines onto shore for the fight and for bringing back the wounded and killed.  Charlie Minter was one of my Dad’s shipmates and had this to say about him.

Quoting Charles Minter <crminter26@ntelos.net> :
“Steve- My name is Charlie Minter. I served under Sparks on deck of the Belle Grove. I went
aboard on Oct 43 was assigned to the 3rd. division aft. The first chewing out I ever got was from Bosn Sparks. He had the longest arm of any one I ever saw. You didn’t fool with him. He was fair as anyone this little 17 year old ever knew. . He could get loud too. I thought a lot of him on
the ship. He was good to me as he got me a pie job on the ship. But with the understanding I would keep his uniforms pressed at all time which I did. Hope this helps.” Charles R Minter P.O. Box 585 Daleville, Va.

On this Memorial Day it is a great honor to remember my Dad and all his shipmates on the USS Belle Grove, including Charlie Minter’s kind recollections of his relationship with “Bosn Sparks.” 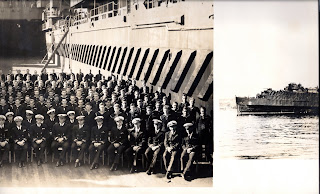 BMC Sparks is 3rd Chief Petty Officer from the right in 2nd row.  The Belle Grove was in need of repair at the end of WWII.

Steve Sparks is a retired information technology sales and marketing executive with over 35 years of industry experience, including a Bachelors’ in Management from St. Mary’s College. His creative outlet is as a non-fiction author, writing about his roots as a post-WWII US Navy military child growing up in the 1950s-1960s.
View all posts by stevesparks →
← A symptom of PTSD, extreme guilt, often lives forever with surviving combat veterans. Wounded Warriors Project is a great resource for PTSD support! →