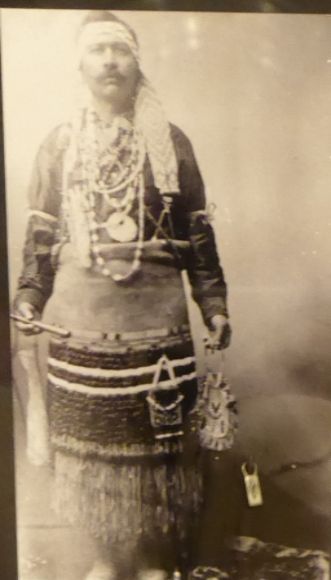 William Hauser DePoe, Sr. died on January 11, 1997. He was born in Siletz, Oregon on December 14, 1912 to Robert Charles (Siletz Indian) and Mary Houser DePoe (Cheyenne Indian), the 4th of 5 children: Reggie, Chuck, Peter and Roberta. Both his parents were school teachers who later moved to Neah Bay, Washington to teach school.

He was named after his great grandfather Chief William Charles DePoe, of DePoe Bay, Oregon. He inherited and carried on the tradition and title of “Chief”. He also was a direct descendent of Chief White Antelope of the Sand Creek Cheyenne Band.”

This natural harbor in Depoe Bay was used for seal hunting and fishing. There were many streams in the area, which provided an abundance of fish.

Our rugged coastline in area of current-day Depoe Bay had beautiful features such as Arch Rock, the spouting horns, sea cliffs and terraces, many caves, and a subterranean fresh water lake, but was lacking in easy access to sandy beaches.

Sharing Native American culture and traditions on the Central Oregon Coast has been a joy and most spiritual experience in my life. I feel do much peace of mind from the traditions of Natives who lived here long before us.

These good people lived in peace and harmony with nature before the white man came to rape and pillage their land, and dignity. Shame on us I say, shame on us.

Depoe Bay was an early tribal family living on the shore of the Bay. Imagine the thriving tribal community, the Siletz, I believe. We pushed them east, as we know now.

We cut the first growth big Spruce & Firs down, never to be seen in their glory again. These big beautiful trees, some 500 years old, were cut down right in front of the Depoe Tribal Community’s eyes, then came the town of Depoe Bay. More shame on us.

Yes, I do feel angry about the way Natives were treated then, and they, as good people, still remain depressed communities with significant social and cultural challenges.

I believe we must do better, I know in my heart and soul. I intend to focus more than ever on Lincoln County’s tribal community as your next Lincoln County Oregon Commissioner.

Steve Sparks is a retired information technology sales and marketing executive with over 35 years of industry experience, including a Bachelors’ in Management from St. Mary’s College. His creative outlet is as a non-fiction author, writing about his roots as a post-WWII US Navy military child growing up in the 1950s-1960s.
View all posts by Steve →
← Arthur Kamuntu, Social Worker, Mabarara, Uganda My Very First Job at Western Union c1966... And, 1st Crime Scene! →