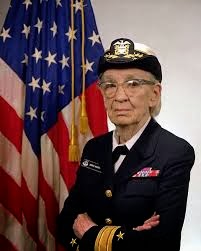 “Hopper created COBOL (Common Business-Oriented Language,) the program that allows computer to communicate through language as well as numbers. She joined the Navy Reserve in 1943, when she was teaching mathematics at Vassar, and finally reached the rank of rear admiral in 1985. Hopper, who repeatedly un-retired, became the oldest woman in the armed forces at the age of 76.  Hopper is credited with coining the term “bug in the system” because of the time she actually found a bug in a computer. As TIME described it in 1984:”


As a career information technology professional with roots in the business back to the 1960’s and a US Navy veteran, my memory has failed me.  I was both shocked and delighted to see the article reference above on the 107th birthday celebration of a computer scientist ICON, Grace Hopper.  What was I doing for all those years highly focused on computer technology and telecommunications and not remember Grace Hopper.  COBOL (Common Business-Oriented Language,) the program that allows computer to communicate through language as well as numbers was after all created by US Navy veteran Hopper.  Without this first big step in developing a computer language to complement numbers, none of us would have had careers at all.


http://en.wikipedia.org/wiki/Grace_Hopper
“Grace Murray Hopper (December 9, 1906 – January 1, 1992) was an American computer scientist and United States Navy rear admiral. A pioneer in the field, she was one of the first programmers of the Harvard Mark I computer, and developed the first compiler for a computer programming language.[1][2][3][4][5] She conceptualized the idea of machine-independent programming languages, which led to the development of COBOL, one of the first modern programming languages. She is credited with popularizing the term “debugging” for fixing computer glitches (inspired by an actual mothremoved from the computer). Owing to the breadth of her accomplishments and her naval rank, she is sometimes referred to as “Amazing Grace”.[6][7] The U.S. Navy destroyer USS Hopper (DDG-70) is named for her, as was the Cray XE6 “Hopper” supercomputer at NERSC.”

Computer Education Week is an excellent time to remind ourselves and the new generation of computer scientists of the critical work and evolution of computer sciences during the 20th Century, including those who made a difference like Grace Hopper, Steve Jobs, Bill Gates, and others.  It is also a time to put an increased emphasis on computer technology learning in our public schools, including after-school programs like Neighbors for Kids in Depoe Bay, Oregon.  Kids now have many opportunities to develop the computer skills and passion to advance information technology to meet the challenges of the 21st Century and beyond…  I can remember when using computers was a scary proposition.  These days we can start training kids at an early age to take advantage of the power of computers, including Internet “cloud computing” to increase K-12 learning capacity in science, technology, engineering, arts, and math…”STEAM” as we have coined the curriculum priorities.

Please join me in honoring and remembering computer scientists and entrepreneurs like Grace Hopper from the 20th Century, and reminding our kids to take advantage of computer educational resources available today.  Young people can become highly skilled in information technology disciplines in public schools, after-school programs, vocational schools, colleges, and the Armed Forces…

Steve Sparks is a retired information technology sales and marketing executive with over 35 years of industry experience, including a Bachelors’ in Management from St. Mary’s College. His creative outlet is as a non-fiction author, writing about his roots as a post-WWII US Navy military child growing up in the 1950s-1960s.
View all posts by stevesparks →
← Nelson Mandela...Triumph over hate and fear! The gift of finding peace of mind... Happy Birthday, Dad! My gift to you on this day is forgiveness and healing... →