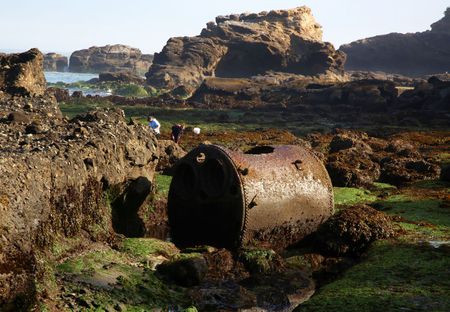 “On the afternoon of May 19, 1910, the J. Marhoffer, a 174-foot steam-powered schooner, was powering its way north along the Oregon coast. Captain Gustave Peterson, who was travelling with his wife, was steering the ship toward the mouth of the Columbia River, the trip going smoothly so far.

The schooner reached the central coast in the afternoon, when the chief engineer, off duty, fell asleep in his cabin. He left the engine room under the watch of the first assistant engineer, who that day was laboring over a blow torch that refused to light.

Presumably frustrated, he had pumped the torch up to high pressure when it suddenly exploded, spewing flaming gasoline everywhere. Before he could even begin to put out the fire, the engine room erupted into flames. Seeing black smoke pouring through the ship, Captain Peterson called for the engine room to be flooded, but it was already too late. The schooner quickly became engulfed in an inferno, and was now hurtling out of control.”

Look for lowest tides of the year

Judy and I, along with out of town visitors, have been going a little north of town for many years to watch the waves at Boiler Bay. We continue to be drawn to this gorgeous and stunning turnoff at the State Park.

It’s easy from the north or south of Depoe Bay. From the north look for the entrance on the right just before entering our town. There is a small turn off short of the park, easy to miss but worth a stop.

You can see the ship’s anchor stationed on the left of the trail north along the shore line. This is a hike worth taking if you have the time and the right shoes, but often tricky and a little risky for the weary.

The hike will eventually lead to Fogarty Creek Beach and State Park. Don’t miss it! You’ll love hanging out at the sanding beach looking for agates and other treasures of the sea.

If you don’t have all day, go into the entrance of Boiler Bay State Park and park anywhere. You could have a picnic on a beautiful warm sunny day. Otherwise, it’s cold, windy and wet on many days, especially during the winter month,

If you take the short walk on the trail to the point, look for a a spouting hole or “horn” you can say. Bird watching and often big waves crash and spray on the basalt rocks below, Don’t attempt to climb, down on the rocks though, it’s very very dangerous, especially with “sneaker waves.”

It’s a nice day today in Depoe Bay. Judy and I are thinking of a short drive there after we get a Latee at Pirates Coffee.

Think I’ll take my camera along too. I love making YouTube clips and photos there too.

Steve Sparks is a retired information technology sales and marketing executive with over 35 years of industry experience, including a Bachelors’ in Management from St. Mary’s College. His creative outlet is as a non-fiction author, writing about his roots as a post-WWII US Navy military child growing up in the 1950s-1960s.
View all posts by stevesparks →
← PTSD Postal Stamp Symbolizes Healing from Trauma... Manzanar Japanese American Intercamp 80 Years of Remembrance... →