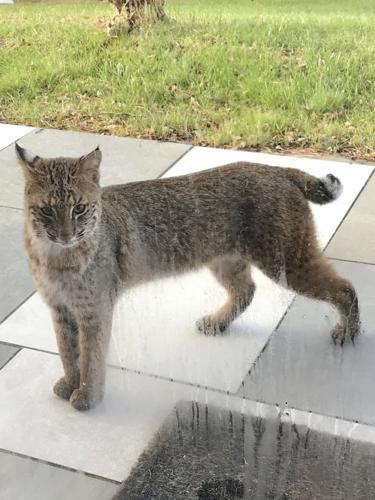 “The bobcat (Lynx rufus), also known as the red lynx, is a medium-sized cat native to North America. It ranges from southern Canada through most of the contiguous United States to Oaxaca in Mexico.

It is listed as Least Concern on the IUCN Red List since 2002, due to its wide distribution and large population. Although it has been hunted extensively both for sport and fur, populations have proven stable, though declining in some areas.[1]”

This looks just like the Bobcat I bumped into today in the backyard. Bobcats can jump 12ft easy. So they jump around the neighborhood looking for Bunny Wabbits.

I named him Billy Bobcat. He was standing in front of me when I walked out to the patio. Licking his chops after eating delicious Bunny legs.

Billy looked up at me as if I was intruding in his space. He then returned to licking his chops and cleaning up himself after lunch. It’s good to quietly observe wildlife and not make a fuss. Bobcats are not pets even though they look like a sweet kitty.

Bobcats prefer backyard Bunnies the most. As a second choice, insects, Chickens, and other birds, small rodents and even deer. Prey selection depends on location, habitat season, and population. Like most cats, the bobcat is territorial and can be nasty, especially with cubs. Keep your distance!

I’m iinspired by the diversity of the Sonora Desert. Learning, writing and sharing my experiences as they happen makes living here even more special.

Steve Sparks is a retired information technology sales and marketing executive with over 35 years of industry experience, including a Bachelors’ in Management from St. Mary’s College. His creative outlet is as a non-fiction author, writing about his roots as a post-WWII US Navy military child growing up in the 1950s-1960s.
View all posts by stevesparks →
← The Monsoons Comin' So What Does That Mean? When It Rains The Sonora Sings To Me... →