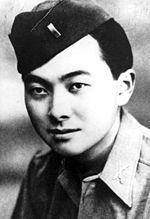 Inouye as a Lieutenant in the U.S. Army
http://en.m.wikipedia.org/wiki/Daniel_Inouye Quote from this website…

“As his squad distracted the third machine gunner, Inouye crawled toward the final bunker, eventually drawing within 10 yards. As he raised himself up and cocked his arm to throw his last grenade into the fighting position, a German inside the bunker fired a rifle grenade that struck him on the right elbow, severing most of his arm and leaving his own primed grenade reflexively “clenched in a fist that suddenly didn’t belong to me anymore”.[11] Inouye’s horrified soldiers moved to his aid, but he shouted for them to keep back out of fear his severed fist would involuntarily relax and drop the grenade. As the German inside the bunker reloaded his rifle, Inouye pried the live grenade from his useless right hand and transferred it to his left. As the German aimed his rifle to finish him off, Inouye tossed the grenade off-hand into the bunker and destroyed it. He stumbled to his feet and continued forward, silencing the last German resistance with a one-handed burst from his Thompson before being wounded in the leg and tumbling unconscious to the bottom of the ridge. When he awoke to see the concerned men of his platoon hovering over him, his only comment before being carried away was to gruffly order them to return to their positions, since, as he pointed out, “nobody called off the war!”[12]
The remainder of Inouye’s mutilated right arm was later amputated at a field hospital without proper anesthesia, as he had been given too much morphine at an aid station and it was feared any more would lower his blood pressure enough to kill him.[13]
Although Inouye had lost his right arm, he remained in the military until 1947 and was honorably discharged with the rank of captain. At the time of his leaving the Army, he was a recipient of the Bronze Star Medal and the Purple Heart. Inouye was initially awarded the Distinguished Service Cross for his bravery in this action, with the award later being upgraded to the Medal of Honor by President Bill Clinton (alongside 19 other Nisei servicemen who served in the 442nd Regimental Combat Team and were believed to have been denied proper recognition of their bravery due to their race).[14] His story, along with interviews with him about the war as a whole, were featured prominently in the 2007 Ken Burns documentary The War.[15]
While recovering from war wounds and the amputation of his right forearm from the grenade wound (mentioned above) at Percy Jones Army Hospital, Inouye met future Republican presidential candidate Bob Dole, then a fellow patient. While at the same hospital, Inouye also met future fellow Democrat and Senator Philip Hart, who had been injured on D-Day. Dole mentioned to Inouye that after the war he planned to go to Congress; Inouye beat him there by a few years. The two remained lifelong friends. In 2003, the hospital was renamed the Hart-Dole-Inouye Federal Center in honor of the three WWII veterans.”

According to news reports, Daniel Inouye’s last statement before passing was, “Aloha.”  How fitting is this for a truly special American hero with a remarkable legacy of service to his country?  I enjoy remembering our heroes by honoring how they made a difference for others in their life time.  Senator Inouye served America for all of his adult life starting with the US Army during WWII.  The number of remaining WWII veterans is becoming smaller with each day.  We will always acknowledge and honor the “Greatest Generation” of Americans.  Now we should take a private moment to remember and honor Daniel Inouye for his long service, dedication, passion and contributions to the United States of America…

Steve Sparks is a retired information technology sales and marketing executive with over 35 years of industry experience, including a Bachelors’ in Management from St. Mary’s College. His creative outlet is as a non-fiction author, writing about his roots as a post-WWII US Navy military child growing up in the 1950s-1960s.
View all posts by stevesparks →
← "Mental Health Evaluations" and Gun Control... I like the "drivers license" test! War of 1812 - Battle of New Orleans...The history of New Orleans is breathtaking! →