A Valentines Day Tribute…to my loving wife and partner of 30 years…Judy Sparks, who gave me the gift of deep love, friendship and compassion in my life…

My loving wife and partner, Judy, saved my life almost 14 years ago…at a low time in my life and in our marriage.  She has always been my best friend and loving partner since we first started dating in the early 1980’s while both of us were working in the same careers in Seattle, Washington.  We became good friends in the mid 1970’s working together to advance professionalism and recognition of telecommunications industry professionals as board members in the Telecommunication Association..Northwest Chapter (TCA).

When we found each other in a closer friendship, then marriage in April 1984, my life changed dramatically. Judy showed me what love was really like.  I did not know or trust love until that time so long ago.  Judy put me on a path of healing, love, and compassion for others that was never experienced in my life before that time.  I discovered a life larger than myself for the first time…a beautiful thing and a miracle in life that was not possible or part of my life until the moment we became one…
Judy’s story is captured in a wonderful and heartfelt video filmed at a speaking event during the 2013 Celebration of Honor.  I was invited to speak at the Lincoln City Cultural Center on September 21, 2013 about children and families challenged with PTSD as part of the event.  My talk was entitled, Surviving and Thriving…as a family with PTSD…  Please click on the YouTube video below and listen to Judy’s introduction (click link) for my discussion on this critically important topic of our time when so many families are challenged in life after trauma as veterans and 1st responders…
Steve Sparks…on this Valentines Day in February 2014… 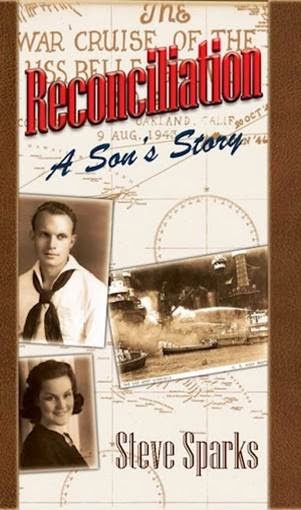 FORWARD – Reconciliation, A Son’s Story by Steve Sparks.  Forward was written by Judy Young Sparks.
In March, 2011, my husband and I traveled to Bucerias, Mexico.  Our first night there we met the woman in the room next to us while sitting outside on our patio.  As the woman said good bye, she casually mentioned her husband would be reliving another helicopter battle in Vietnam that evening and hoped we would not be disturbed.  I asked if he was okay and she said he suffered from Post Traumatic Stress Disorder, and relived the dream night after night.  We met her husband in the elevator the next day; he was a gentle, quiet man.  From outward appearances we would never have known he suffered from a mental health issue.  After our weekend we upgraded to a larger suite in an adjacent building and did not run into our neighbors again before their departure from the resort.
Steve had started documenting his father’s World War II history about two months prior to our trip.  He planned to request his father’s naval records when we returned from Mexico.  As luck would have it, about six days into our trip I became ill and dehydrated, and more or less completely missed two days of our Mexican adventure.  Being a devoted, caring husband, Steve stayed in the room with me while I recovered from a vicious bacterial infection.  While I slept, he worked on his “story” to record his family history for our children and grandchildren.  Having a clear head away from our daily grind, his “story” began evolving into something much larger.
As I read this body of work I began to see the story as a case study from the perspective of a lay person.  Steve had shared some of his childhood memories with me, but as he embraced each of his siblings in telling their stories, I saw a much bigger picture unfolding.  Steve’s new awareness about his father’s “battle fatigue” condition of the past became the catalyst for a significant self-discovery journey.  My husband’s journey through dark moments of his past created an opportunity to lift an invisible veil that both of us had not really fully acknowledged.   The value of facing the truth has been powerful and healing.
Over the last 28 years that I’ve been with my husband I have felt he was misunderstood more than not.  It is clear to me now that misunderstandings are often not the fault of anyone, but the result of not having all the information and communication barriers.   Maybe I’m the exception, not the rule, in separating some of the behaviors from the man I fell in love with.  I am hopeful that those closest to him see a more complete picture of who he is, and his hopes and dreams for his loved ones.  Steve has a warm heart and a loving spirit; writing this story makes it even more apparent.
Watching my anxious partner embrace a more peaceful and happy existence has been a positive journey for me as well.  I have a much greater understanding of what his life has been about during times of struggle.  I don’t believe much in coincidences.  My philosophy has always been that life experiences unfold as they were meant to be.  The timing of Steve’s writing journey is part of the greater plan.  He is able to embrace the truth, learn from this experience and share that with those he loves deeply.  His motivation has also been to help others who may have experienced family trauma, especially related to military service.   He wants to share his newfound peace and hopefully make a difference for the greater good.
I’ve often thought about the couple next door in Mexico during these last months.  Steve’s extensive research on PTSD has given me an informed perspective I did not have previously.  My hope is that our short time neighbors in Mexico and other war veterans are able to reach a peaceful existence within their own families, and break the cycle of intergenerational PTSD.  Although there are many take-aways in Part 3 of this book for all to consider, perhaps the greatest is knowing that none of us is alone in our life’s journey.  Unconditional love exists for each of us from a higher power or, if we’re fortunate enough, from earthly family and friends as well.  In love lies our strength.
Judy Young Sparks
Depoe Bay, Oregon
September, 2011
Judy Sparks Introduction of Steve Sparks…”Surviving and Thriving PTSD”  click this link to see video clip…

Steve Sparks is a retired information technology sales and marketing executive with over 35 years of industry experience, including a Bachelors’ in Management from St. Mary’s College. His creative outlet is as a non-fiction author, writing about his roots as a post-WWII US Navy military child growing up in the 1950s-1960s.
View all posts by stevesparks →
← Why are we talking more about "mindfulness" and "meditation" to treat anxiety or depression? "Living in the moment" is hard work, but it works... The "flip side" of PTSD...making you stronger in the face of adversity... Resilience and self awareness! →