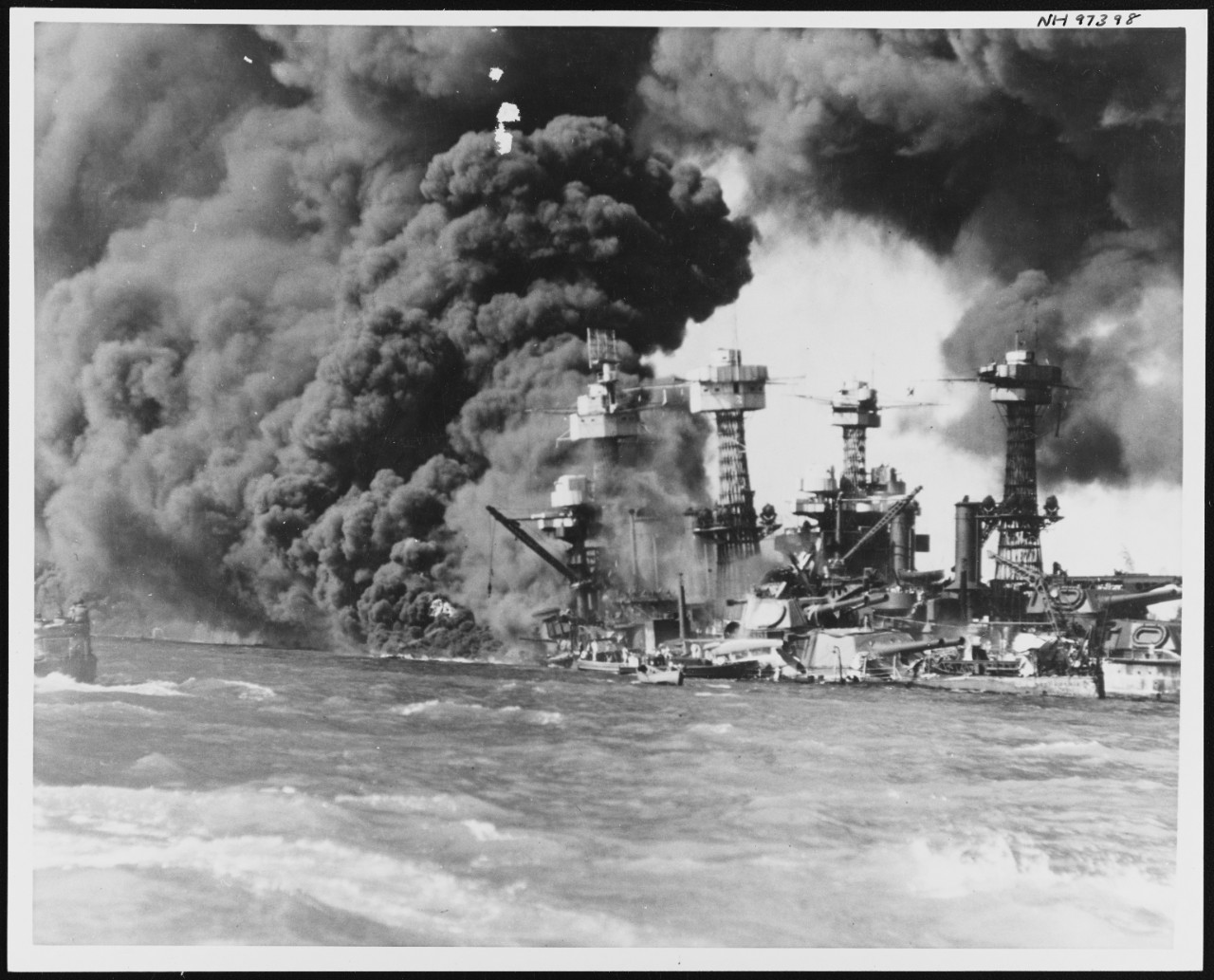 The book, Unbroken, by Kristen Hillabrand & major motion picture, directed by Angelia Jolie was a moving tribute to a young man in the 30’s who grew up in Torrance. CA.

I spent much of my young life growing up in Torrance too… The story reminded me of the sacrifices and heroism of our heroes who fought for our freedoms during WWII.

My father, Vernon, was one such hero, who served with honor, duty and pride as a US Navy warrior in the Pacific, including Pearl Harbor. He was aboard the USS Virginia on that fateful morning, December 7, 1941…

It was Sunday, a beautiful day in Hawaii, like most days. It was quite and peaceful, not a worry in that moment. Dad was in the ships galley at 6:00am like most mornings.

Vernon got back from liberty with his battle buddies just before midnight curfew. Vernon was already in deep shit for missing curfew a couple of times.

Vernon and Dorie became fast friends in the summer of 1941 when the USS West Virginia left Long Beach Harbor for Pearl Harbor.

Early that morning in the ship’s galley…

“Hey Dorie!” Vernon would holler out with that loud bos’n low growling voice. “How about some of that shitty coffee you make. And don’t fuck up my easy over eggs this time.”

Sailors loved to to pick on each other a little. It was a little respite from all the monotony aboard ship. They weren’t thinking about war or fighting in that moment.

They thought about being at the ‘ol’ slop shoot’ in Honolulu. You know, a whiskey shooter in one hand and glass of beer in queue as a chaser, and the other arm around a beautiful young oriental girl. Sweet…indeed.

They loved the way Dorie made bad food, cooking, and being away from home like, “back home in the kitchen with famiy.” They all talked about Dorie this way.

Christmas was coming and they wouldn’t be going home. Dorie would help them forget about that.

Dorie could turn a really bad day into a hell of a lot of laughs by all. Vernon loved Dorie. They all loved his huge smile, laughs, and stories from Waco.

It was this way on that Sunday morning on December 7, 1941. It was another beautiful sunny warm day in Pearl Harbor.

Vernon and Dorie talked of liberty that night. “Which ‘slop shoot’ should we go to tonight, Dorie?” Vernon would yell and laugh at the same time in a mischievous way.

When the 1st torpedoes hit…

Shortly after that, a little after 8am, Vernon was under the turret on the main deck, yelling as loud as he could at his buddy Dorie. “Dorie, Dorie, get the fuck down from that gun! Get down before you get killed. We are abandoning ship, Dorie! Can you hear me?”

Dorie looked down at Vernon as if to say, I’m gonna shoot down another one of those Jap mother fuckers!”

Shortly later Vernon, Dorie and 100s of other shipmates jumped overboard. They swam to Ford Island through burning oil, strafing and more bombs.

It didn’t look good for them in that moment. But survived they did… But many shipmates didn’t make it on that day.

Warriors never forget battle buddies who parish at sea or on land. “We will never ever forget them . ” Vernon would say in his mind over and over again the rest of his life.

Vernon would never forgot his shipmates on that fateful day, December 7, 1941. His best friend, Roy Powers, was killed on the day. He never recovered from the memories of of Roy’s head blowing off when the first torpedo hit the starboard side of the ship…

In memory of all those who served on that fateful day so long ago. My father served in all of WWII Pacific Theater from 1941 to 1945…

We are all here because of heroes like Vernon, who served with honor, duty and pride. Dad was a warrior like no other. He paid dearly the rest of his life. As a family, we served too, and suffered all our lives with secondary PTSD and major depressive disorders, all of us, especially Mom…

The work of CFLAT is dedicated to veterans of all wars, and the families who served too…

Steve Sparks is a retired information technology sales and marketing executive with over 35 years of industry experience, including a Bachelors’ in Management from St. Mary’s College. His creative outlet is as a non-fiction author, writing about his roots as a post-WWII US Navy military child growing up in the 1950s-1960s.
View all posts by Steve →
← Native American Thanksgiving Traditions... The Good, Bad 'n Ugly Vulnerability...Taking a Risk to be Authentic →